We spent some time with Derbyshire all-rounder, Anuj Dal where he talked about fitness and the demands of modern cricket

“if you don’t look and act like an elite sports professional, you risk not being one any more.” It’s safe to say fitness is essential.

Anyone raised by TV in the glorious 90s – four channels thank you very much – would regularly catch A-grade cricketers on the box.

On A Question of Sport or They Think It’s All Over, our sport’s elite rarely looked like … sport’s elite. Nah, cricketers looked like geezers. Sorry Darren, Shane, Tuffers, but when sat next to panellists from cycling, boxing, rowing, rugby, football or athletics you weren’t the same picture of health.

No-one’s saying Jockie Wilson bad, but Linford Christies they were not.

To understand training, fitness and nutrition today, Derbyshire all-rounder Anuj Dal is here to help us gauge the demands of cricket in 2019.

“In this day and age, fitness is so important. A generation back you had guys who didn’t really look like they were athletes, but that whole side of it has changed.  On the pro circuit today, guys who aren’t fit enough stand out like a sore thumb.

“You have to be fit to play cricket, you don’t play cricket to be fit. That’s one massive thing that the ECB and the cricket board has instilled in junior players growing up now.” 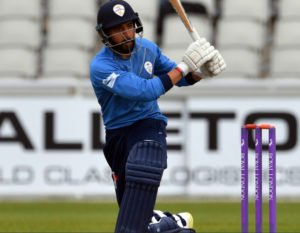 Even non-cricket fans won’t be surprised to know that the game has evolved in line with global television, the power of sponsors and modern sport-science. Given the cash now pulsing through cricket’s veins, cutting unfit players is an easy choice for coaches. If a club can save 150 grand on a wishy-washy pro and spend it on several fit junior talents, they will.

Anuj is someone who sorely appreciates the opportunities at his feet. Born into a cricket-mad family in Newcastle, he was raised in Nottingham and playing the sport as soon as he could walk, destroying the front room in cahoots with dad and his older brother. Anuj got involved with Nottinghamshire at the age of nine, and joined the team as a junior in his late teens.

Although he struggled to break into a competitive Notts side, which included the likes of Chris Read and Stuart Broad, Anuj caught the eye of world-renowned coach John Wright. He made a timely move west to Derbyshire two years ago, just in time for 2017’s T20.

“A club like Derbyshire – even though it’s smaller than Notts or Surrey – still has nutritionists, physios, psychologists and technical coaches. Today, the infrastructure is solid – it all points towards maximising performance.

“We have fitness testing four, five, even six times a year to make sure we’re in good nick and ready to deal with the rigours of professional cricket. There’s yo-yo cardio tests, muscle tests, and speed, jump and strength testing. But it’s a year-round thing.

“When we return from the off-season, we’ll spend a couple of months purely on fitness, five hours a day, Monday to Friday. Typically half will be cardio and half strength-based training.”

Anuj describes a winter training regime that involves experimenting with other team games, testing players’ endurance and performance when engaged in more physically demanding sports, such as basketball or football. He recalls winter training at Notts when the demands of winter yo-yo sessions had some of the lads “vomiting at the end”.

At the height of summer play, a pro like Anuj can expect to play a competitive game every three or four days. He explains that fast bowlers get an extreme cardio workout on matchdays, clocking up 25km in sprints over the course of a day. As an all-rounder, Anuj elects to spend at least an additional hour each week in the gym to maintain peak fitness.

Anuj also has the added variable, some might say complication, of being vegetarian in an era where protein – and particularly the mainly meat-based amino acid leucine – is a central component to any athlete’s diet.

Only with the help of Derbyshire’s Strength and Conditioning coach (and nutritionist), Jonty Norris, and a lot of supplements, can Anuj manage to nail his required protein and diet profile each day. The ritual and discipline of it seems like another level of commitment versus the slacker looking cricket pin-ups of the 90s.

“When I was 16 or 17, I’d grab a snack at breakfast or skip it entirely. But you quickly realise that approach doesn’t compute with being an elite competitor who needs to stay on top. As a vegetarian, protein shakes and supplements are massive in my diet. I have up to three protein shakes a day – as well as bars and amino acids – because I physically wouldn’t be able to perform at my elite best without them.”

Staying at his elite best is crucially important to Anuj, who also runs his own cricket coaching company. Like any other ambitious young player, the goal is to play regularly for his country at the highest level. Like football – think Gazza or Maradona – only the seriously gifted can get to the top and stay there without the fitness to back it up. And even then, it mightn’t last long.

The risk of  complacency as a cricketer

“Look at the current England team who just won the world cup. Up and down the squad, not a single one of them lacked fitness or looked out of place. It’s fairly simple: why wouldn’t you want to be fit and do as much as you can to stay in such a competitive, well-paid job?”

Given the stakes in modern cricket – the cash, the travel opportunities, the fame – the sport is more competitive than ever before. With that, Anuj describes a more fundamental drawback of having unfit players on a team: perception.

“Even if you have the ability of a Shane Warne, coaches probably won’t pick you because you don’t represent a great example. There are still some players in county circuit that you look at and think geez – how have you managed to stay in the game?

“As a player, when you see everyone – from the juniors to the seniors – working so hard and there’s that one guy who isn’t giving his all, it’s frustrating. It’s frustrating as a fellow player, and it’s frustrating for coaches to have that element in their squad.

“In the past five years, I’ve seen guys who are incredibly talented sitting on the bench for two or three months of the season because of their fitness. Some end up losing their job. And it’s such a waste of a brilliant opportunity to do something you love for a living.”

Every young player dreams of putting on the whites for England: playing at that level, even for a handful of years, will set up an athlete for life. The current crop of new players are always looking at reaching the top level and set on giving themselves every opportunity to get there.

The heightened competition for places means coaches, fans and the media are looking with sharper eyes at each player in multiple dimensions. As Anuj says, the golden rule in cricket today is not standing out for the wrong reasons.

“There’s a lot of media scrutiny inside and outside the game. Especially at a national level, we know what’ll happen if there’s an extra-curricular slip-up. We’ve seen it recently, and it can cost players big time. The best way to look at it is if you don’t look and act like an elite sports professional, you risk not being one any more.”

And check out his coaching business, Purpose Cricket!