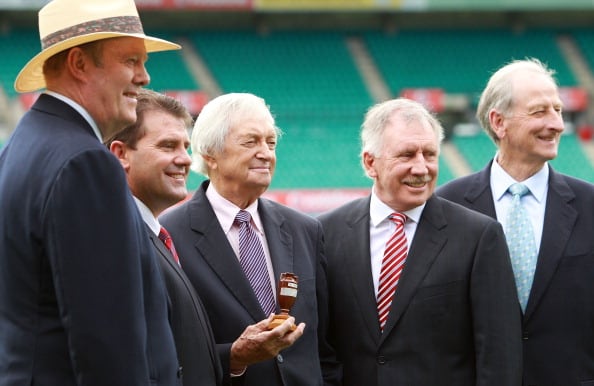 Sun shining, crowd abuzz, drink in-hand, they say there’s nothing quite like walking into the stadium on day one of a Test match. But for many of us, it’s a pleasure we don’t know.

Today with social media, omnipotent TV and ball-by-ball Google updates, we can catch the game in whatever format we choose to feel closer to the action.

The days when remote fans relied exclusively on a colourful troupe of commentators to bring life to the wonderful game might not be now what they once were. But that doesn’t mean we can’t recognise, remember and revere the names that called the games.

No cricket commentator shortlist could be complete without Richie Benaud. A vital all-rounder for Australia who, despite a sluggish debut year in 1952, became a charismatic leader, under whom the Aussies never lost a series.

When Benaud swapped the bat for a mic he forever tied his unmistakable voice up in the game, cementing his iconic status off the field as well as on it.

Dubbed by many as the voice of cricket, Richie’s commentary was popular the world over and, all in, he added lyrics to the music of cricket for 45 years until retirement in 2009.

If there was anyone in the world who could have you on the edge of your seat during the dullest of matches it was Tony Grieg. Although Grieg was one of the finest players of his generation, his captivating voice and impeccable vocal timing made him, arguably, an even better stick-man.

Outspoken and fearless, Greig once explained, “I’m a pressman’s dream. If you talk to me long enough I will say something controversial.” He wasn’t wrong.

Half-Scottish, South African-born, an English cricketer who later moved to Australia – Tony Grieg is rightly a different kind of international icon, with an accent that is so distinctive it has spawned a million impressions … none that ever got close.

Unlike many of the commentators we know today, Tony Cozier was not a professional cricketer but, like his father before him, a journalist.

At the age of 25, Cozier was an established radio commentator in his native Barbados, when a slew of offers came in from international broadcasters to secure his services.

Why? Cozier was more than a voice or a great commentator. He was, as famously described by Scyld Berry, British sports journalist and former editor of the Wisden’s Cricket Almanac, as both the voice and the conscience of West Indies cricket.

In a career that lasted over half a century, Cozier never shied away from voicing his opinions, his passions, his woes. He’s a man credited with changing cricket broadcasting in the West Indies, and even further afield.

David Lloyd tried his hand at everything in cricket: playing, coaching, commentating and even umpiring. Though he enjoyed an extensive career in the game, two of his roles stand out.

A successful stint as coach at his beloved Lancashire won him the opportunity to coach the English national side. And in three years at the helm, Lloyd guided English cricket onto a better path, including a five-test series victory for the first time in over a decade.

Bill Lawry’s entry into the cricket arena frustrated some cricket fans – he was seen as rigid and defensive. Sometimes controversial, Lawry was a decorated player and a successful captain, yet it was on the microphone that Bill’s popularity soared and shone.

It’s ironic that hearing Lawry’s voice on the radio or television evoked the opposite reaction he got used to as a batsman. It became a cliché when Bill would exclaim “it’s all happening” when the game got going, or, “He’s gone!” when a wicket fell. But for a certain generation, cricket without Lawry was markedly incomplete.

Those are just a handful of the best to have called the game but special mentions go to Geoffrey Boycott, revered for his humour, his Yorkshire accent, and the phrase “even my mum could have played that shot,” as well as John Arlott and Henry Blofeld. That pair, likewise, are another class of cricket commentator.

At BatFast, we recognize the importance of having someone call the game. It adds excitement, personalizes the action for viewers and engages you to the game just as much as a Batsman’s skill. So, the next time you call BatFast, remember that there is “commentary” feature that lets you pick up the microphone and call the game while your mates are in the nets, taking on the likes of Jofra Archer and Shane Warne.