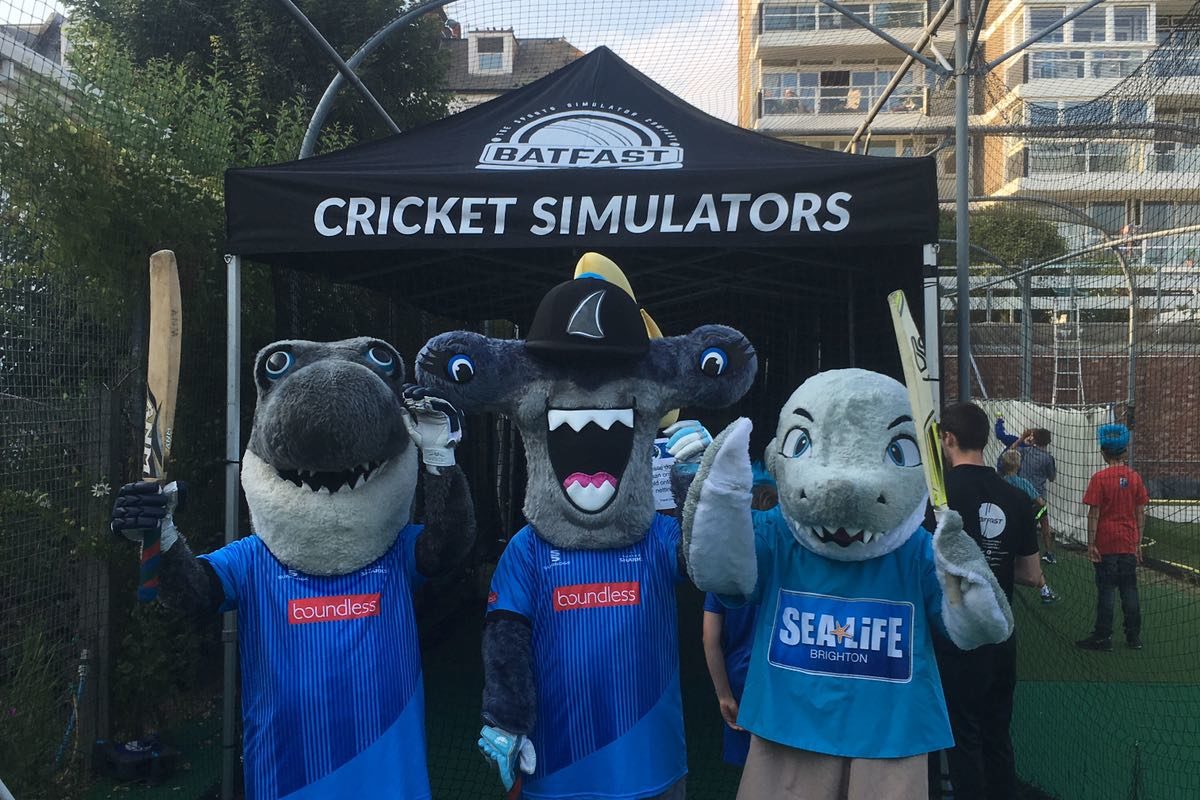 BATFAST travelled across the country last Friday to set up our world-class cricket simulators. Our events team visited three separate venues for Vitality Blast matches, in Sussex, Durham and Worcestershire. Worcestershire also hosted an England physical disability IT20 against a Pakistan – Bangladesh select, prior to their domestic T20 fixture.

This was our first event in the new Sea Life Family Stand at Sussex which proved a great experience with hundreds of kids having fun.

The match itself will live long in the memory due to Aaron Finch hitting a spectacular 131 runs not out. This innings was the highest ever individual score by a Surrey batsman in the T20 format. The Australia captain smashed seven sixes, providing great entertainment for the crowd. Surrey finished on 192-3.

In reply, Salt batted well for Sussex scoring 74 runs from just 47 balls. However, wickets tumbled at the other end, leaving Sussex 140 all out. Victory for Surrey leaves them two points behind Sussex in the south group table after four matches each.

Yorkshire won the toss at the Emirates Riverside and decided to bat first. They hit a good score of 157-6 thanks to contributions from Harry Borok and Jonathan Tattersall hitting 38 and 36 respectively. Veteran all-rounder Paul Collingwood finished with impressive bowling figures 3-27.

In response, Durham got off to a great start with the bat. Both openers passed 30 runs each. However, Yorkshire took wickets at crucial times to restrict the run rate. This meant Durham finished 10 runs short, with 147-6 from their 20 overs. The win pushes Yorkshire up to fourth in the North Group with three victories from their first four matches.

Unfortunately, New Road experienced heavy rain at times during the day. This meant the match was reduced to nine overs per side. But with the match shortened the run rate skyrocketed. Worcestershire batted first and smashed a massive 130-3 at 14.4 runs per over. This was helped by overseas batsmen Travis Head who hit 37 runs for the Rapids.

The scoreboard pressure proved too much for Northants who hit 89-6 from their nine overs, meaning the Worcestershire Rapids won the match by 41 runs. This leaves them top of the North Group having won their first four matches of the competition. 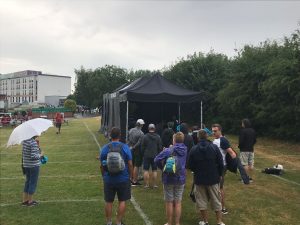 Heavy rain didn’t stop the queues for our cricket simulator.

This match was also at New Road, starting prior to the Vitality Blast match. The standard of cricket on display was inspiring. England will be very happy with their performance, giving them a 22 run victory. The England PD coach Ian Salisbury said, “this week was about the visibility of disability cricket.” The visibility is clearly growing with some videos going viral on social media. For example, check out this boundary fielding from Liam Thomas in 2016.

Overall the day was great fun with thousands of people having a bat on our simulators. For information regarding upcoming events follow our Twitter/Instagram/Facebook accounts @BatFastCC.