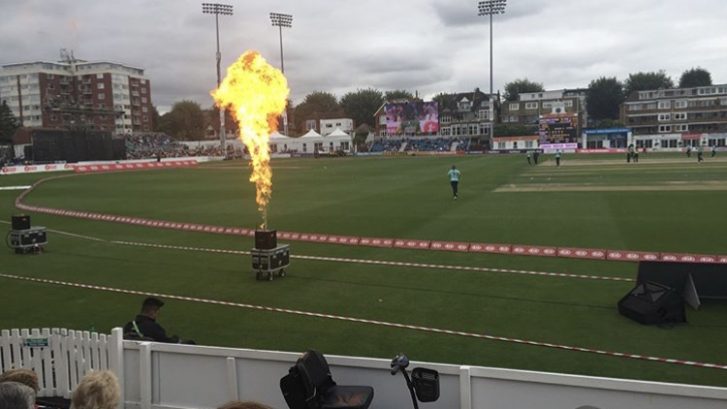 Last Monday our events team travelled to Sussex for the Kia Super League finals day. Our simulator was set up for over five hours with hundreds of fans having a bat. The day was a memorable one for women’s cricket with the top domestic teams battling it out to become champions. Loughborough Lightning finished top of the group stage, meaning they went straight through to the final. They awaited the winner from the semi-final. This match was between the Western Storm and the Surrey Stars who came 2nd and 3rd respectively in the group stage.

The Western Storm won the toss and decided to field first. The match was high scoring on a typically good Hove wicket. But the Western Storm could be happy with the start they made restricting the Stars to 72-5 from the first 11 overs. Davies was the pick of the bowlers with 1-21 from her 4 overs. However, the Stars didn’t lose any wickets after this point. This was thanks to a brilliant partnership between Natalie Sciver and Marizanne Kapp. Who finished on 72 and 32 runs respectively. This pushed the Stars score to a very competitive 162-5 from their 20 overs.

The Western Storms run chase started well with the opener Rachel Priest playing a good cameo hitting 24 at a strike rate over 140. The Western Storm captain and key player Heather Knight passed 30 putting the game in the balance. However, the Stars took wickets at vital times to kill the momentum of the run chase. Fran Wilson batted brilliantly with a score of 58 not out but wickets kept falling at the other end meaning the Western Storm finished 9 runs short. Sciver who starred with the bat for the Stars was also instrumental with the ball achieving figures of 2-21 from her 4 overs. With just 9 runs between the two teams, the semi-final was certainly a thriller.

The Surrey Stars were jubilant from their semi-final win just a few hours prior and took this confidence straight into the final. Having been put into bat they came out firing. Lizelle Lee smashed an astonishing 104 runs from just 58 balls. This innings included six sixes – giving the crowd plenty of catching practice. As a result, Surrey finished on 183-6, putting themselves in a commanding position.

The immense scoreboard pressure proved too much for the Lightning who’s innings never got going. Only three of their top six made double figures. This was thanks to some brilliant bowling from the Stars, in particular, 19-year-old Mady Villiers who took 3 wickets from her four overs. Consequently, the Lightning were all out for 117 from 18.3 overs – 66 runs short. This result was unexpected as the Lightning had been so dominant in the group stage, nonetheless, the Stars deserved to win on the day.

This day marked the end of the 2018 Kia Super League. We have thoroughly enjoyed taking our batting simulators to lots of KSL fixtures this year and we look forward to next season with the competition growing every year. A special mention to the huge crowd at Hove last Monday, many of whom tried our unique batting simulator for the first time, becoming a part of the BatFast tribe. We hope the day will have inspired girls, in particular, to participate in cricket.

To find out more about what our simulators can do click here.