Danielle Wyatt is a key member of the England women’s cricket team, having made over one hundred appearances since her debut in 2010. We caught up with her during the COVID-19 lockdown to chat about her career so far and how she is keeping busy during the quarantine period.

When you first started playing cricket, how popular was the ladies game?

Not at all popular. There were maybe 2 other girls who played cricket in my area. Now there are about 5 different girls teams which is amazing to see.

Who were your role models growing up?

My Grandad Baggaley, he was a legend and someone I looked up to until he passed not long ago. Sporting wise, David Beckham, Ricky Ponting and Andrew Flintoff.

When you were younger, what other sport did you play?

I played all sorts, including football for Langdale Harriers, squash for the West Midlands as well as table tennis, tennis, chess, and pool.

You still play men’s cricket for your local team, Whitmore CC, what are your thoughts on a mix-gender cricket?

I always say to any young aspiring girl cricketers to play boys cricket for as long as you can. I learned a lot playing with lads, they obviously bowl quicker, hit the ball harder, throw it and move faster so it made me learn very quickly and adapt to their standards. Adult mixed-gender cricket isn’t going to happen – they’re completely different games. The men can tap the ball for six, whereas we have to time it well and really connect with it.

What was it like breaking the stereotype that cricket isn’t just for men?

I didn’t even think of it, to be honest. I’ve always thought cricket is for girls and boys. The skills have increased so much in the women’s game and it is getting harder and harder now especially now every international team is professional and breaking down that gap from the lesser countries, to the likes of England, India, Australia and New Zealand. It’s great to see. Every game is really competitive now, there are no easy games, and we always have to be prepared and ready.

How has the game changed since you started playing?

The commercial side of the game has also come on leaps and bounds. Now every professional has their own bat and kit sponsor which are often from worldwide sporting brands such as New Balance.

This commercial growth has come with increased media attention on all the players. We have to be careful with what we do on social media and how we act as we are role models around the world. I see this as part of the job, in 2020 we can really make a living out of cricket which is brilliant and I feel honoured to do so!

What’s your vision for women’s cricket over the next 5 years?

I want to win the World Cup again in New Zealand in February and keep on winning and doing our country proud. The Hundred competition is going to be amazing for us in terms of bridging the large gap from county cricket to international cricket. The Kia Super League was a great success and hopefully, The Hundred can be even better. Bring it on!

In The Hundred, men and women will share an overall prize pot of £600,000. What are your thoughts on this?

Yes, this was great news. It’s great to see the ECB showcasing equal pay for men and women’s cricket and I hope this leads on to other competitions worldwide.

Your England career started at 18 years old in India, a tough place for anyone to play, nevermind on your debut, how was the experience?

Back then there were about 50 people in the crowd, whereas now there will be at least a few thousand screaming at you. It was completely different to playing in England, the weather was hot and muggy and the wicket was one of the slowest I had ever played on. My first run was a guide to third man, off one of the best bowlers in the world, Juhlan Goswami. I went on to get 28* helping us chase the score down and win the match. At the time, I was picked as an off-spinner and a number 8 batter – that soon changed.

I remember one thing, my dad didn’t arrive in India in time for my debut – but he was there for the next match where I got run out for a duck. Poor Dad! 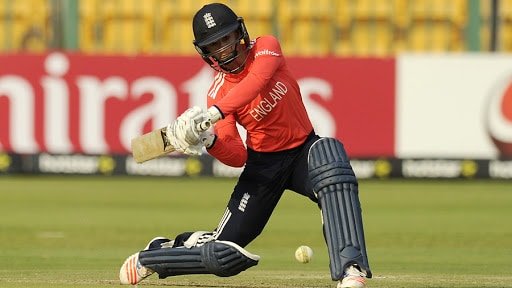 What motivated you at the start of your career?

I just loved playing cricket, and it all happened so quickly. I got picked for the England academy because of my performances with England u21’s and for my county, Staffordshire. Then 3 years later I got the call-up. I was on the beach in Sydney then off I went on my first tour to India. I remember my family were so happy for me, my grandparents, my cousin’s brothers, parents everyone, and I still play for them all. I obviously love it too, but whenever I’m out there in the field of battle, I have my family in my head, there is no better feeling than making them proud. My parents drove me across the UK for 10 years, now they get to watch me play cricket around the world.

How did you feel scoring your first Ashes century in 2017?

It was an incredible feeling, that run chase was historic, allowing us to draw the series. It was a day I will never forget. My grandad, who was my hero, passed away just before I flew out to Australia so that was for him. I got really emotional, looking up to the sky after I hit Perry for a single through covers taking me to 100. After I took it all in and got home, I was like phew, I finally showed the world what I could do. I showed glimpses throughout my career but never consistently, this is where it started.

Talk us through the 2017 World Cup, and on a personal note what it was like to miss out on the final?

I felt so good throughout the whole of the World Cup and pushed myself to the limit in training every day. One of my highlights was the knock against Australia at Bristol to help us win the game, the atmosphere that day was incredible! To be left out of the remaining games was not a nice feeling, but it showed the strength and depth we had in the squad at the time.

I was backing us to go all the way after we beat the Aussies in the group stage and I will never forget the feeling of running onto the pitch knowing we just won the World Cup. Champions of the world in front of a sell-out crowd at lords – it doesn’t get any better than that!

How much of a positive impact did winning the World Cup have on raising the profile of women’s cricket?

It was massive. So many people watched the game at the ground and on the TV. We helped inspire the country, which was our aim. We won team of the year at Sports Personality Of The Year which topped it off and brought even more exposure to the game. So many people still talk about the final and Anya Shrubsoles winning it – she’s a legend. I hope many young girls and boys watched that and thought- wow I want to go and buy a bat and ball to play cricket.

What was your favourite moment of the T20 World Cup in 2020 in Australia?

Beating West Indies in Sydney to reach the semi-finals.

What was it like being knocked out in the semi-final despite a ball not being bowling?

It just didn’t make sense at all, I still can’t believe it. I’m still gutted. I’ve never hated the rain so much as then. And to rub it in, even more, somehow the Aussies played after us and beat South Africa.

From playing cricket around the world, has any experience left a lasting impact on your life?

I owe cricket a lot, it matured me and opened my eyes for sure. Travelling the world with my friends is amazing, and I’m very lucky. It’s taught me to always be humble, put people first, and be a great person. What will be will be.

What do you think about new technology like BatFast and the role it has in modern cricket?

It would be great if I had one in my back garden, there would be no better practise than facing Elyse Perry Esque bowling every day!

What are you currently doing to keep yourself busy during quarantine?

Thank you for taking the time to chat with us. You are an inspiration and hugely important for the ladies game, so finally, what advice would you give any young girls starting their cricket career?

To play cricket with the boys for as long as you can. Besides that, keep it simple, be brave, have fun and believe in yourself.

Once again, a huge thank you to Danni- let’s see you lift the 2021 World Cup in  February!