Uncomplicated, one-click, intuitive. For players, the BatFast cricket simulator is plug and play. But behind the effortless facade, off-site engineers are tweaking, improving, building and, uniquely, recreating cricket’s most iconic moments beat-for-beat.

With that, anyone, anywhere can take to the BatFast crease and challenge cricket’s greats.

It’s next-gen, it’s hi-tech, it’s futuristic. It’s kit built on a budget and made possible by skill, serendipity … and a Honda Civic.

The story of BatFast tech

The latest addition to BatFast is a recreation of the World Cup final super-over: deliveries from Jofra Archer and Trent Boult. Pinpoint measurements meet high-spec computer graphics to offer a lifelike repeat of those tournament-winning balls. This is the latest pitch-perfect interpretation of iconic cricket moments. Shane Warne’s 1993 ‘ball of the century’, has long been part of BatFast.

With the ink still wet on BatFast’s partnership deal with Tenpin bowling, players anywhere can relive and experience replicas of cricket’s most iconic moments; even if they happened yesterday.

But for all the intricate features and USPs, BatFast’s next-gen tech actually came together thanks to budget constraints, good timing and happenstance.

For co-founders Jignesh Patel and Runish Gudhka (Jigs and Roon), lifelong friends who shared childhood in Kenya, BatFast nearly fell at the first hurdle when their initial route-to-market (modifying an existing cricket simulator) came with a £50,000 price tag.

Thankfully, the hefty commercials pointed entirely at the problem BatFast would later solve. The only option, really, was to build from scratch an easy cricket simulator of their very own. 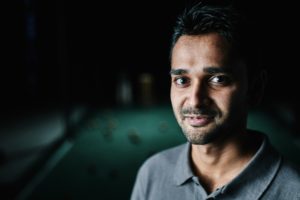 The seeds of BatFast were first planted when Runish, back in the UK after a stint playing cricket for the Kenyan national team, was studying an Entrepreneurship MA in London. He wanted to explore the mainstream business potential in cricket. Jignesh was a natural business partner. Although his formal education was in mechanical engineering, former Nissan genius Jigs had spent his early career working in the sweet-spot between electrics and software.

Roon and Jigs wanted to create an available, affordable, accessible cricket simulator. But whether it was for training or entertainment, they weren’t entirely sure. Serendipity soon helped them figure out that those were two sides of the same coin.

There’s an age where cricket participation is particularly pronounced: under 16. By their mid-teens, once-keen cricketers leave the sport: they get distracted by life and more mainstream, lucrative sports. Batting simulators are not only a way to increase participation – and the mainstream draw of the game – but they’re an accessible new entry point for those who weren’t born into cricket.

The mission of breaking down barriers and increasing participation in cricket began to inform the tech and product build.

Regardless of back-end complexity, the system’s front-end needed to be so easy and intuitive that anyone, from kids onward, could work it. The kit needed to be lightweight, modular, transportable and adaptable to fit the entertainment/ leisure landscape as it is. Stashing them in cricket centres would continue the same issue of access and raise the bar once more. BatFast would meet people in public places; locations that are already part of people’s lives.

BatFast came together in Jigs’ Loughborough boxroom. He spent evenings and weekends working on the technical framework and Runish joined him at weekends – sleeping over in that same boxroom – to work on the front-end UX.

Fast forward and today’s BatFast controls today are one-click, second-nature for gamers and obvious to anyone who’s ever held a smartphone. People don’t want to be confused, they want to plug in and play: step up, tap, and enjoy the thrill of the hit.

One initial fear the pair had was that BatFast simulators would each require a mainframe computer, driving up cost and complexity – presenting a massive barrier in scaling the business. But once again, BatFast’s timing was serendipitous.

Roon and Jigs were building their kit through 2015, an era when off-the-shelf software components and API integration were straightforward and, crucially, affordable.

The B1 prototype is comprised of adapted software plug-ins and off-the-shelf hardware, including bowling wheel. The control panel has been refined and refined to the point where it’s barely three touchscreen commands on an iPad.

Another happy coincidence was that Jigs, for very practical reasons, built the BatFast prototype to fit in his Honda Civic. The bowling machine, the screen, the livery, the stand – everything had to fit his Honda. Why? He didn’t have a van.

Fast forward, and BatFast’s nimble, portable kit opened up a BatFast live events division that’s delivering cricket far and wide. It’s a successful piece of the revenue puzzle and driving the original mission deeper into the UK and beyond. 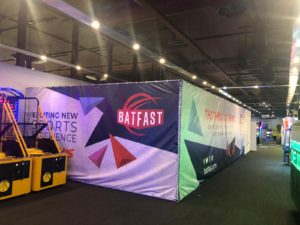 The Honda Civic came into its own when Jigs and Roon loaded the first prototype (B1 – it’s still in use today) and set off to an investor meeting. After a quick demo, investment was signed off that very day.

The childhood friends had the mission, the product and now the capital behind them to scale and grow. They left the big careers, Jigs in engineering and Runish as a PwC management consultant, to begin life as a start-up, and progress was swift.

From setting up in an incubator on-campus at Loughborough university, client number one – a Canadian entrepreneur looking to serve the cricket-mad Indian continental communities of Toronto – was soon on-board.

BatFast’s piece-by-piece approach has exposed a variety of business opportunities. Whether establishments want one component (one London pub currently has only a bowling machine) or the full kit, the versatile and modular technology underneath the simulator makes it all possible.

Today, scores of BatFast simulators sit on several continents. These range from the prototype-inspired B1, to the more complex B2 and cutting edge B2S simulators. Each generation of the machine offers enhanced spin, interactivity and gameplay.

Jignesh and his team of developers maintain the diaspora of BatFast simulators from a single control unit. Cloud connectivity enables Over The Air updates, so Jigs and co can, remotely and one by one, send new gameplay to each machine.

Jignesh and co are, as we speak, refining camera tracking, AI, and impact sensors to chart BatFast balls’ trajectories. Rest assured any updates will be immediately available at a simulator near you.

From kit originally built on a budget, shaped via coincidence, and with a Honda Civic playing a lead role, the results are a beautiful blend of serendipity, cunning and determination. The lifespan of a simulator is as limitless as the team’s imagination and it’s all in the name of bringing cricket to the feet of new fans and players – for a new generation.