BATFAST travelled across the country last Sunday to set up our world-class cricket simulators. One team travelled to Lancashire for a Vitality Blast match against the Northamptonshire Steelbacks. A separate team travelled to Derbyshire for another Vitality Blast match, against the Worcestershire Rapids. And a third team visited Essex for the Newham Fun Fair. The weather was excellent at every location making it a great day for all involved.

In this match, the visitors won the toss and decided to bat. However, they only managed to post a total of 122-9. Lancashire chased this total down in 16.1 overs. Steven Davies starred with the bat, scoring 64 runs from 43 balls contributing to the host’s comfortable victory. Northants are now bottom of the North Group still seeking their first victory.

Worcester won the toss and chose to put Derbyshire into bat. This proved to be a good move as they restricted the hosts to 135-9 through disciplined bowling. Worcester managed to chase this score with eight balls to spare, following a good contribution by overseas batsmen Martin Guptill. Guptill batted with good control scoring a run a ball 65. The county is in a commanding position with the victory over Derbyshire making it three wins from their first three games.

BATFAST associated with Essex CCC for this event as part of their outreach program. This was a great opportunity to give kids a thrilling cricket experience in a largely southern Asian community. The Fun Fair was an exciting event to be involved in with a number of other fun activities alongside the cricket simulator, such as a circus performance.

Overall the day was a great success with thousands of people having a bat on our simulators. For information regarding upcoming events follow our Twitter/Instagram/Facebook accounts @BatFastCC. 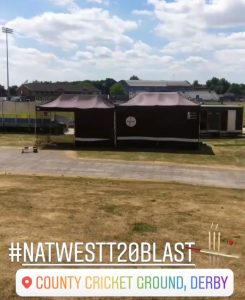